Wanda Nylon. More than a brand, a mythical creature. It – she ? – is the brainchild of two very different people, people you might say are polar opposites. 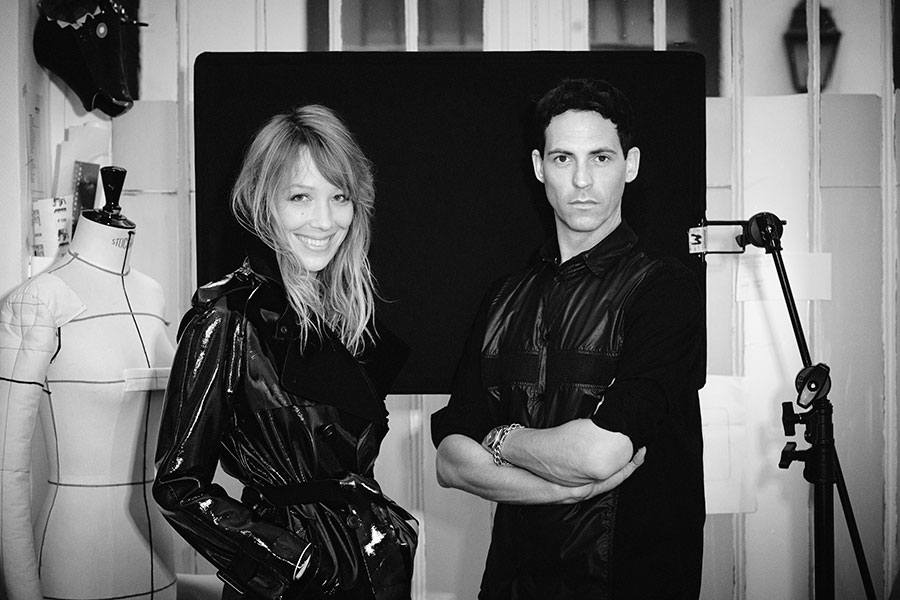 The icy beauty of Peter, the carefree energy of Johanna – Wanda inherits the best traits of her two progenitors.

Unlikely as their collection specialized in synthetic outerwear might be, it has caught the eye of the fashion world, quickly positioning Wanda as one of Paris’ exciting, young, native brands.  Functional, resistant, sexy, playful, modern, a touch retro is the rare mix which they have pulled off.

To give it life (or death, depending on how you see it), dancer and model Lida Fox embodies a woman determined to prove…

Wanda Nylon clothes are not just waterproof, but also blood-proof. 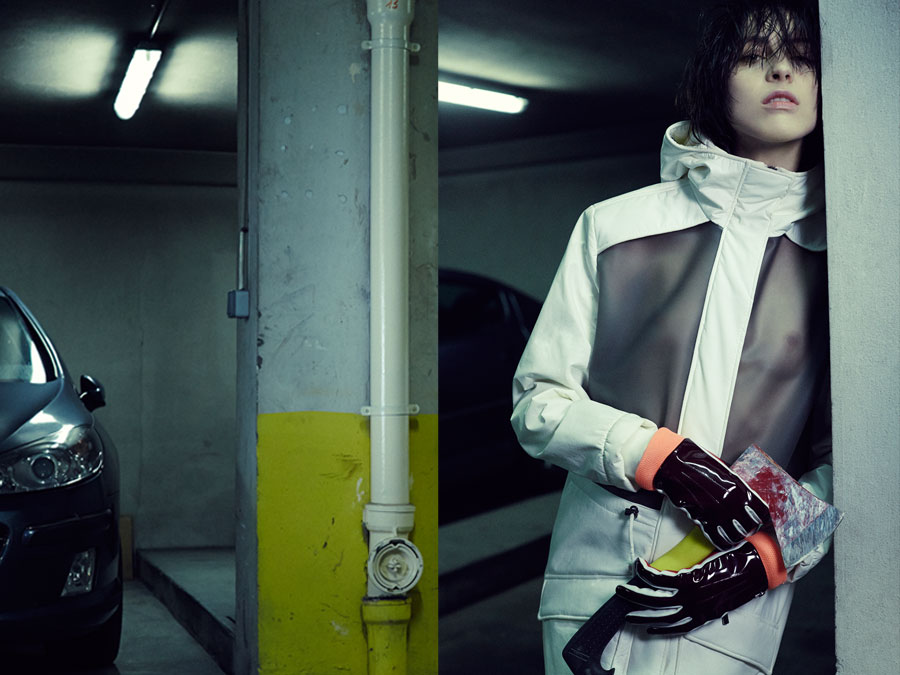 Johanna Sennyk : I chose Paris. Well, it’s the biggest city in France and seeing as I didn’t know how to speak any other languages… [Laughs.] I decided on Paris at the age of seventeen, I was determined to move there and start a new life. I was in Tours—properly provincial!—but I grew up in Algeria as a young Polish girl with dual nationality.

Did Paris disappoint you?

JS: Not at all! The only thing that disappointed me was that I thought that I was going to lose myself here, that it was going to be bigger. I was sort of under that provincial impression that it was going to be a completely impersonal city, and that when you walk around you’d be completely free, you’d bump into nobody you knew. At last, I’ve realized that it’s quite the opposite: it’s so small, and there’s less freedom than I hoped for, less anonymity. It’s definitely less free than the image I had of it when I was young.

Peter, what about you? Did you choose Paris or did Paris choose you?

Peter Hornstein: I chose Paris five years ago… [Long pause.] For work it’s amazing. But the private side of life isn’t much fun. That’s changing though…

JS: Well first, to be Parisian, you need to have your papers, and that’s so complicated! You need parents, guarantors, a job—or to be good at Photoshop! [Laughs.] Sorry to be talking about all that, but when eight out of the ten people in the office are having legal problems becoming Parisian… I’m really angry about it.

PH: You have to be very speedy. And you have to eat very little!

JS: What?
If that’s Parisian for you, then we’ve got totally different ideas!

“If that’s Parisian for you, then we’ve got totally different ideas!” 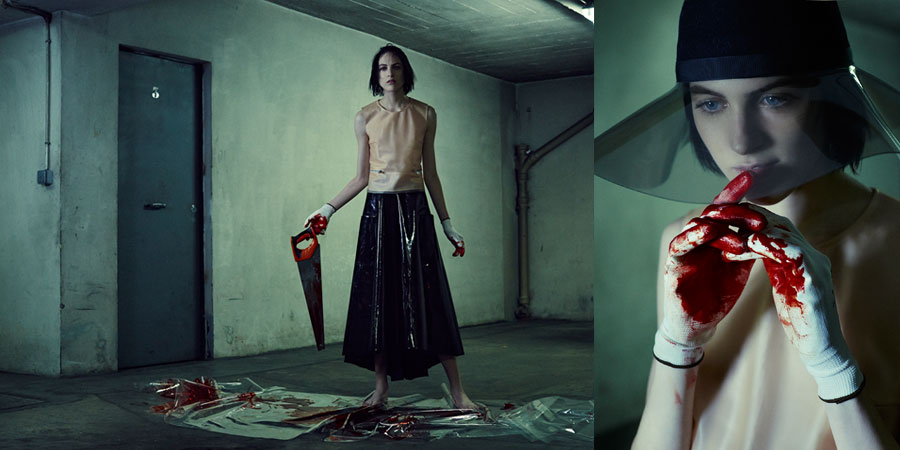 PH: [Laughs.] No, you do have to adapt quite quickly though, it’s a very speedy town—which is a really positive thing about Paris.

JS: Really? I feel as if nothing’s moving…

PH: True. In general, nothing’s moving, but for the physical side of things, you need to be speedy.

JS: I have the impression that if you were to come back in five years, you’d see the same people in the same groups who would tell you the same stories. Here, I know I’m going to bump into such-and-such, with so-and-so, et cetera. Nothing’s moving.

I dreamed Paris was a certain way, and was consequently disappointed. Maybe it would be the same if I moved to New York, and found a microcosm of exactly the same milieu I’m in now. But I don’t think all this would be the case in London, for example, because it’s so much more expansive, sprawling, and heterogeneous. People are less tightly connected. Or so I think!

PH: That’s because there’s a youth culture [in London.] In Paris you have no youth culture: it doesn’t exist. Youth is dead. They’re behaving like old people.

“In Paris you have no youth culture: it doesn’t exist. Youth is dead. They’re behaving like old people.”

JS: But isn’t that just because we’re a little too old for it? If we were going out in that scene, there would be young rock or punk movements, and parties with loads of alternative stuff that we just don’t have any idea about.

PH: No, because I know the scene, and there’s nothing, really nothing. For the size of Paris, there’s nothing.  On a business and administrative level, then yes, Paris is at the center of the world [from a fashion perspective], but on a creative level? No. It is a meeting point, though. It always has been, and it still is.

JS: [Hesitates.] It’s true that when you want to go out somewhere other than a fashion party, to dance, with a decent sound system, good music, a bottle of water, and to sweat and just lose it, you can’t.

Where do you think the creative center is?

PH: Well, preferably, or logically, in places that aren’t very beautiful, and which therefore trigger people to want to change things.

PH: No I don’t think so. Creativity comes from something you want to rebel against.

“Creativity comes from something you want to rebel against.” 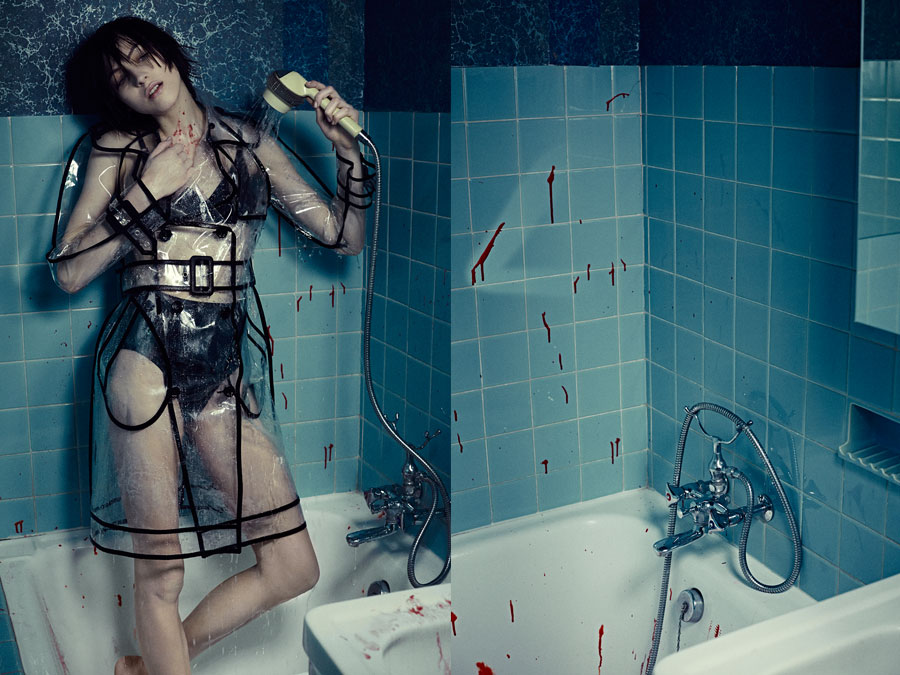 So is Paris too pretty?

JS: I don’t think anything can be “too pretty.” Nobody likes the same things, and nobody does things in the same way. At the minute, there’s nothing truly dazzling around.

PH: It would be too pretty if it were clean, maybe… But then it would be kitsch.

JS: Very few things are going to change. I’d love to see more green space I’d be happy if we could sit on the grass at last. When you look at the British, their way of life, of sharing, and making the most of what they’ve got, and you compare it with the French and their grass that you can look at but not sit on, it reveals a lot about the different cultural mentalities. I’m all about l’art de vivre, the art of everyday life, and for me, the French art de vivre is exactly that liberty: to lie down, have a picnic, and relax on a patch of grass.

JS: Yes! I’m a real parisienne! But then again I don’t know… I always dreamed of spending my last days living off a small vegetable garden and needing nothing else—living self-sufficiently, really. I doubt that’s going to happen, though, if I’m totally honest! I do think that by choosing to come to Paris, to move here, that you’re immediately more Parisian than those that have always lived here, who haven’t made the choice to be here. So yes, I’m definitely a Parisian. 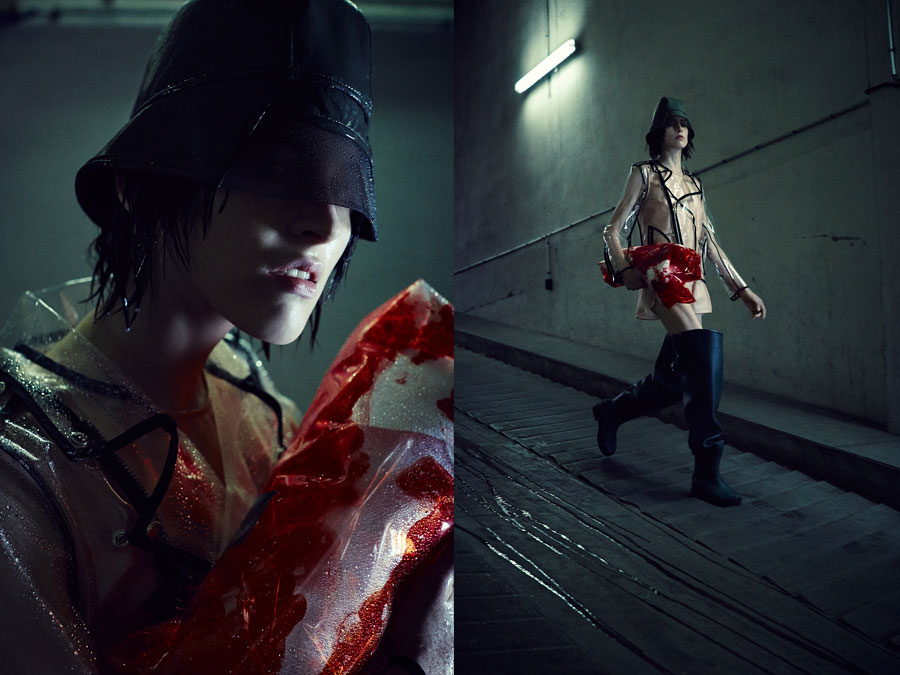 I’d wear something extraordinarily tragic. I’d trawl through history, the history of Paris as the fashion capital of the world, of everything that’s happened here, above all at the start of the [twentieth] century. I’d wear something lace, exquisitely made, in black, something gigantic and tragic—nothing understated. Something without a corset for sure, but I’d be looking for a long time!

But in fact, the question is a lot like “what would you wear to your wedding?” You feel like getting married ten times because you have ten different ideas of what you want in your head, but then you’re told that marriage is for life. So the only thing to do is to get changed five times in the evening—I’d probably do the same at Paris’s funeral.

PH: I don’t go to funerals in general, but for Paris, I’d wear something classic and neutral.

What do you think was the golden age or the youth of Paris? Has there been a golden age?

JS: Has there been a golden age? I don’t know. If we start thinking like that, it’s like those people who say “Fuck, the 80s were so great!” or “Le Palace was so much better back then!” or “The 70s were so much better!” But you need to stop because it’s never coming back, and it’s not helpful to think that way. It’s up to us to move forward, and make sure the time in which we live is as pleasant as it can be, or has ever been. We can’t just get nostalgic. We can’t feel some kind of stupid melancholy for a time or period that we didn’t even know. We need to try and do things as best and as beautifully as we can, because we will never know any different. You need to make your own happiness.

What do you want to be buried with?

JS: I saw this question yesterday and thought about it a lot and searched a lot, and it only made me realize that I am not materialistic at all. Bringing a ring, a jewel, a cat—even photos and things like that—seems sort of pathetic. I’m not a believer; I don’t think anything remains; and I have no interest in material things. I find it sort of pathetic to take one thing with you, just as I find it sort of pathetic to focus on accumulating things like that throughout your life. I would leave as I am.  All I’d take is my secrets.

PH: No. Nothing. And I’d like to be burnt actually, not buried.

What’s next for Wanda Nylon?

JS: Well we’re already doing six collections a year (including Men’s and Women’s pre-collections), so we don’t really want to add any more work—it’s already a huge job. The aim this year is to have more fun. Happiness will come out of that.

Also, we’re working on a project with Victoria’s Secret, which is pretty fun. We’re doing a collaboration for a collection of sunglasses coming out now in time for the fall, and for winter we’ve got three projects on the go which have to do with accessories and the kind of development that Wanda Nylon can’t do alone in the office, mostly technical stuff. 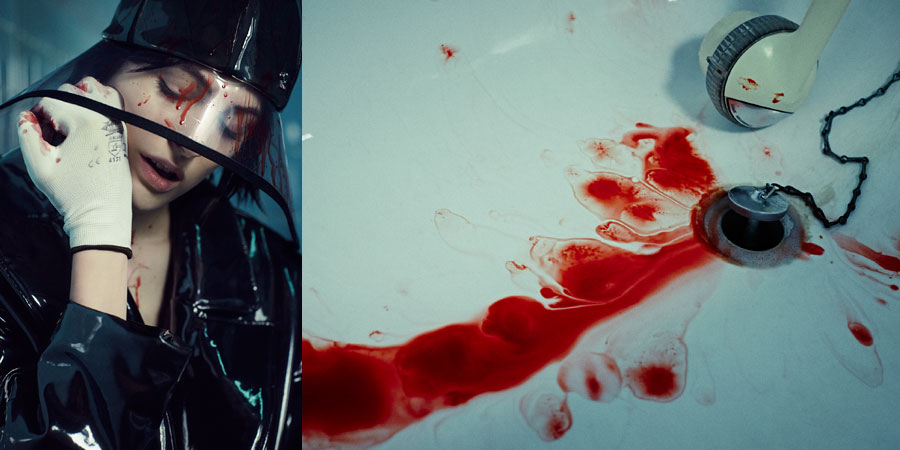 — A story about FASHION WANDA NYLON
previous
next