THE HORROR OF VULGARITY 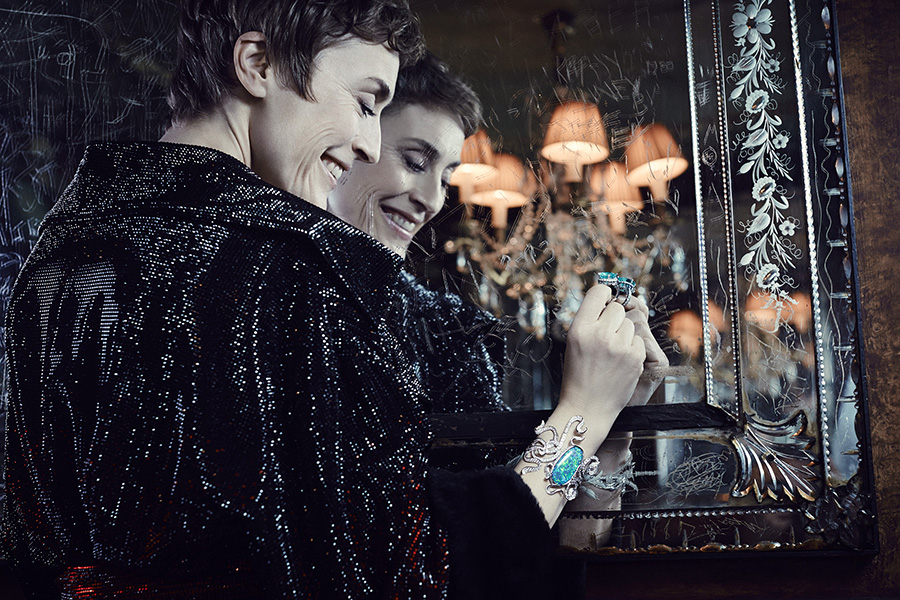 Natasha Fraser-Cavassoni is a nomad, never an exile. London, New York, Los Angeles and Paris have all played host, and all have felt her presence. Venit, vidit, vicit. 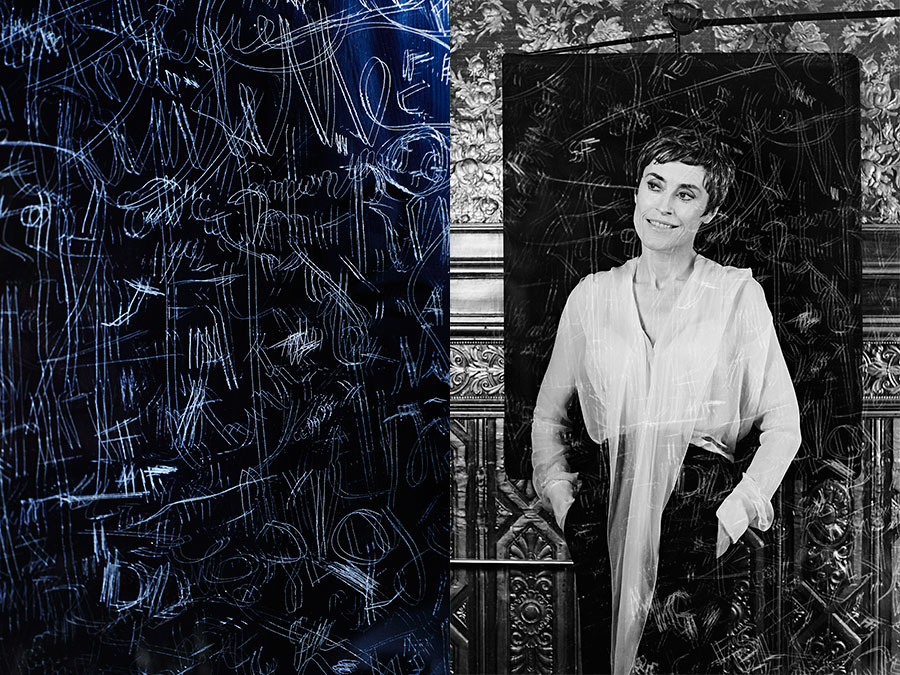 The iconic Lapérouse, where Cavassoni is photographed, is no stranger to formidable women. Society’s historic femmes fatales have left their mark in the form of scratches carved into the restaurant’s mirrors, a test of their new diamonds, the gifts from their lovers.

But Ms Cavassoni is no kept woman.
She is no cocotte.

Fearless, incisive and literary, and with a recently published book on the style icon Loulou de la Falaise – co-done with Ariel de Ravenel – and a tome on Christian Dior as seen by his clients, she is a force to be reckoned with.

Who better to cut deep under Paris’ infamous veneer? 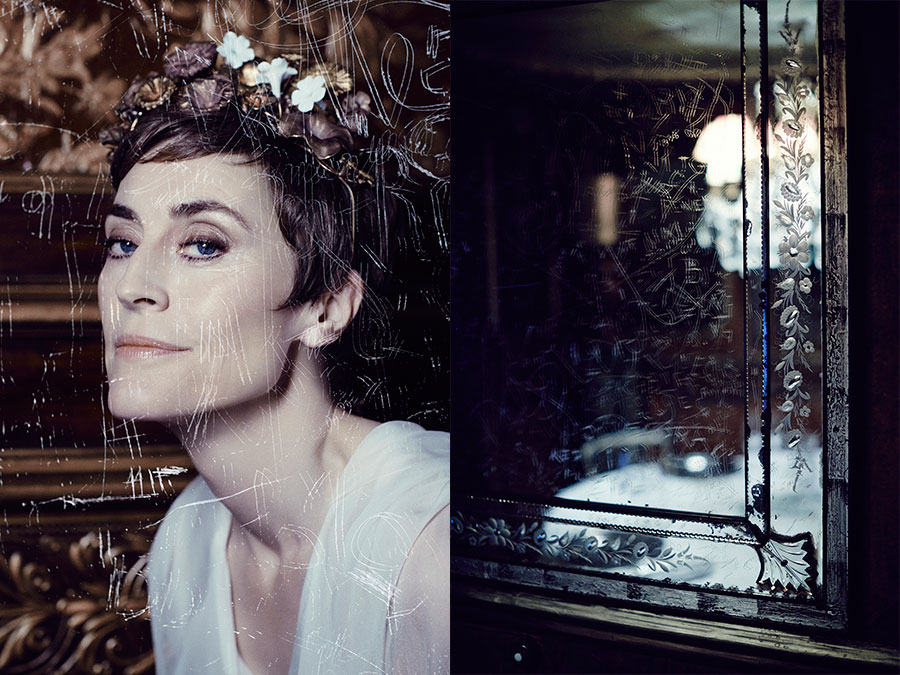 I fell in love with Paris when I was 12. I came here with my godmother, so it was always a special place.
Plus, London was awful for kids in the seventies. Imagine sleeping on nylon sheets? The food was disgusting too.

[Later] I was living in New York, and I really didn’t like New York in ’89. I was working at Interview magazine, and I wanted to move back to Europe. I’d been working with the Warhol studio, I had my own column, and it all looked so good on paper, but it was the height of the yuppies, and I found it so materialistic, predictable and dull. Looking back, I just didn’t belong and felt very sad and isolated: a tragic combination for the city that never sleeps!

When I decided to leave for France, Anna Wintour was kind and sent out a lot of faxes on my behalf, and I ended up at Chanel. Anna was seriously generous to have done that because Paris is really closed. You need someone to open the door. But you also need to be able to dance through and stay there!

“I think it’s both a strength and a weakness of Parisians that they’re so exclusive.”

I think it’s both a strength and a weakness of Parisians that they’re so exclusive. If I go to a party in Paris and don’t know anybody, I’ll just leave, because there’s no point. It used to annoy and frustrate me. But I now wonder if that attitude, to a certain extent, has helped Paris keep its gritty persona and charm.

In London, everyone talks about its amazing energy and that’s true. The English are fabulously curious and funny, both traits that I really admire and relate to. Still, there’s this recent obsession with money that I occasionally find pretty terrifying. It’s very old-fashioned of me and I’ll probably end up as a toothless hermit in a smelly but ecological cave but I do have a horror of vulgarity: the idea that only money counts and that everyone has a price and can be bought. What I love about Paris is that individuality and quality count more than anything and are so prominent in their culture. There’s also that continual fight not to become globalised. Love that!

That’s one thing I love about the French: they also refuse to allow a price on their head. In their minds, they are priceless and they are right! When people ask why Sarkozy didn’t work with the French, I say it’s because he refused to understand their sophistication and they found him pretty vulgar, in many ways. Impossible as the French are, they don’t have the same Anglo-Saxon obsession with money and success.

“Impossible as the French are, they don’t have the same Anglo-Saxon obsession with money and success.”

You say you have a “horror of vulgarity” and that the French do too, but doesn’t this sometimes mean less fun?

Not all French – that would be naïve.com of me! And being in fashion, I kiss the toes of those wonderful people that shop til they drop! Fashion has to sell. I’m pretty bohemian, so people that define bon goût all the time, well, they just wouldn’t have time for me, nor I for them, ever! [Laughs.] I have a horror of bourgeois people, French or English, because I don’t get them and they don’t get me. But if I had to choose between the British or the French bourgeoisie, I’d choose the French, because at least the food is good!

“Tough and unwelcoming as they can be, [the French] admire courage and individuality in someone.”

How does one become a Parisian?

I think the Parisians are every cerebral. When I arrived I thought I was being dismissed and judged, and often they’re just thinking about it, chewing an appearance over and I like that. Tough and unwelcoming as they can be, [the French] admire courage and individuality in someone. They’re upfront, and I like that. They set their own terms and there’s a healthy lack of passive aggressiveness and hypocrisy that can lurk behind politeness.

I am fairly individual in spirit but I don’t think I’m a Parisian. No, not at all! Still, when I go to England, people view me as “Parisian” and that makes me smile and feel a bit of a fraud! I like being a foreigner who lives in Paris because I’m allowed to do and say things that the French can’t.
I once made the mistake of saying sorry, when working in the Chanel studio, and suddenly everything was my fault. I then realised that the French don’t say sorry. Maybe it’s a historical thing, too many times being invaded – that strange pride thing. And they’re right in a way – when the British say sorry it doesn’t mean a thing, it’s just their strange way of being polite.

I wish someone had said to me when I moved to Paris that saying “no” actually means “maybe or even yes tomorrow.” There’s this French thing of just saying “Non!” to everything that can be brutal and quite shocking.

“I once made the mistake of saying sorry, when working in the Chanel studio, and suddenly everything was my fault.” 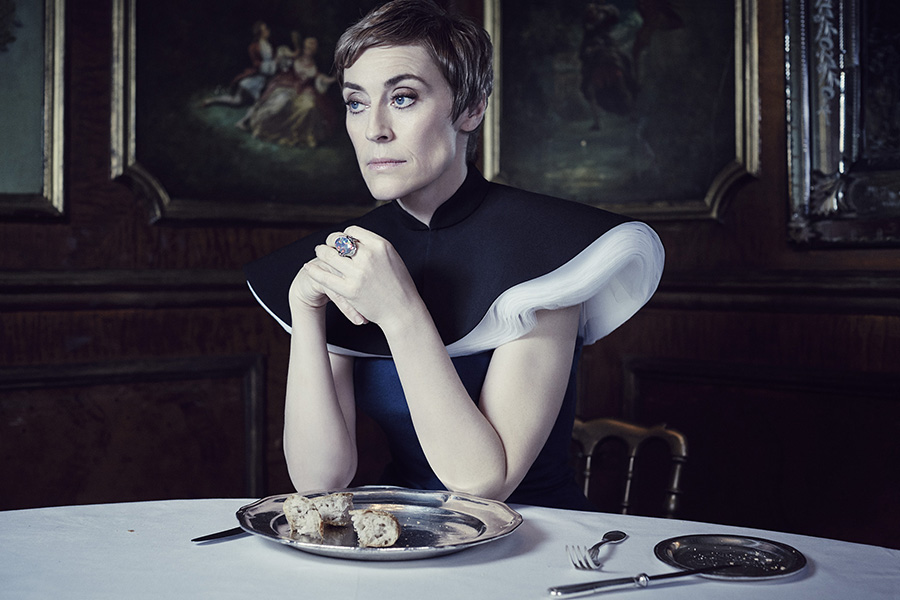 Where is the centre of Paris?

What I love about Paris is that it’s very personal to you. All my American friends would say the centre is the sixth or the seventh – which it is absolutely not for me! I love the romance of the first. I love the Palais Royal, the passage Véro-Dodat, the rue des Petits Champs avenue de l’Opéra… Paris is what you make of it.

Before the opening of the shop Colette, my hood was quite neighbourly and low-key and now it’s become a parade of flashy fashion shops. That one shop totally transformed the rue St. Honoré. You have to hand it to them at Colette! And clearly business is great and things are selling.

I do hope that Paris stays as it is. I refer to the state education and welfare system. I gave birth in a state hospital. Both my daughters are going through the state education system. All that really matters to me. I mean the idea that everyone person in France deserves a decent education and excellent medical care. But I keep on being told that it will change and become privatised. I pray not!

Is there a difference between old Paris and new Paris?

When I first arrived in ’89 I walked down the rue St. Honoré wearing jeans and there were stares. There was a lot of colour and Saint Laurent going on – those Matisse colours – and women were dressed much more like their mothers, and now there’s this horror of not looking remotely like their mother.  Instead women have this obsession with looking sexy and young. Speaking from experience, it doesn’t always work!

“… now there’s this horror of not looking remotely like their mother. Instead women have this obsession with looking sexy and young. Speaking from experience, it doesn’t always work!”

Besides, Parisians in their sixties and seventies often look great because they choose what suits them and they’re not obsessed with the age issue.  In general, young Parisians now make less of an effort, or alternatively, a lot more of an effort at looking like they’ve made less of an effort. It’s still done better in Paris than elsewhere though.

Is fashion still in fashion?

People have got so much money and they’re buying buying buying. Contrary to everyone’s prediction including yours truly, the obsession with the latest thing and next season’s items continues. Obviously, this is tremendous for fashion because, to keep it going, someone’s gotta buy it! [Laughs].

I think fashion has become such an Anglo-Saxon thing because they buy in a way the Parisians don’t. The Parisians have an eye, they will look at Elle and Vogue, and see what they want, do it their own way, and get it for twopence. They’ll say “I’ve had it for years” and they’ve just bought it…

I see it in my daughters at age thirteen, it’s something you acquire living in Paris – I mean is it in the water or the bread? Seriously, there’s an innate knowledge of fabrics, styles and a certain discipline of thought. 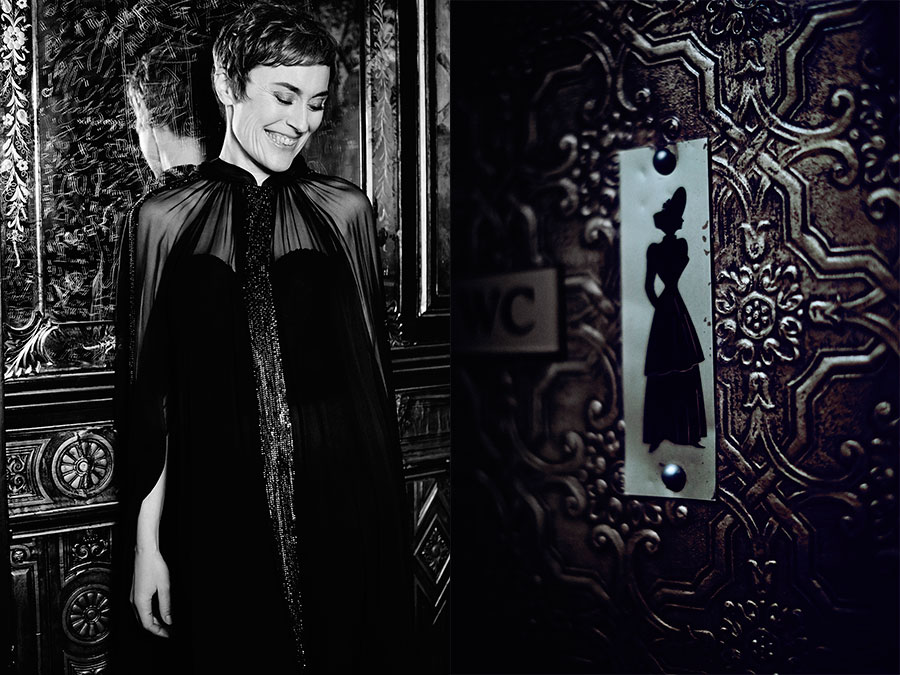 I would wear my Yves Saint Laurent leather jacket that has big diamond buttons and suede sleeves, because whether I am thin or fat, it has a certain 1980s presence. I bought it when I was flat broke. I had gone into the Rive Gauche boutique and a saleswoman grabbed me, saying “I have the perfect jacket for you.” She was right, it was perfect! There are only two that exist: Betty Catroux has the other one. At Paris’s funeral, I’d wear that jacket with black pants and Louboutins.

What object would you be buried with?

A photograph of my kids and – hopefully – their kids: I long to become a grandmother!

I might also wear a Loulou de la Falaise necklace, created when she was at Saint Laurent. From a distance you’d think it was a barbaric Cartier panther – made of glass, it’s all grey, reds and blacks. I loved Loulou – she was so brave, creative and ballsy. Like real French women.

“I think a city that appreciates individuality, creativity and courage can never ever be dead.”

Is Paris Dead? And if so what comes after death?

Paris isn’t dead. I think a city that appreciates individuality, creativity and courage can never ever be dead.

That said, I spend my time defending Paris. So many English people love – and I think it’s the Agincourt thing – saying “apparently Paris is really down,” but the Parisians have never been jolly, it’s always been foreigners that have made Paris fun. The point is quality of life and possessing an amazing respect for creativity. In many ways, Paris is the city to watch because of that.