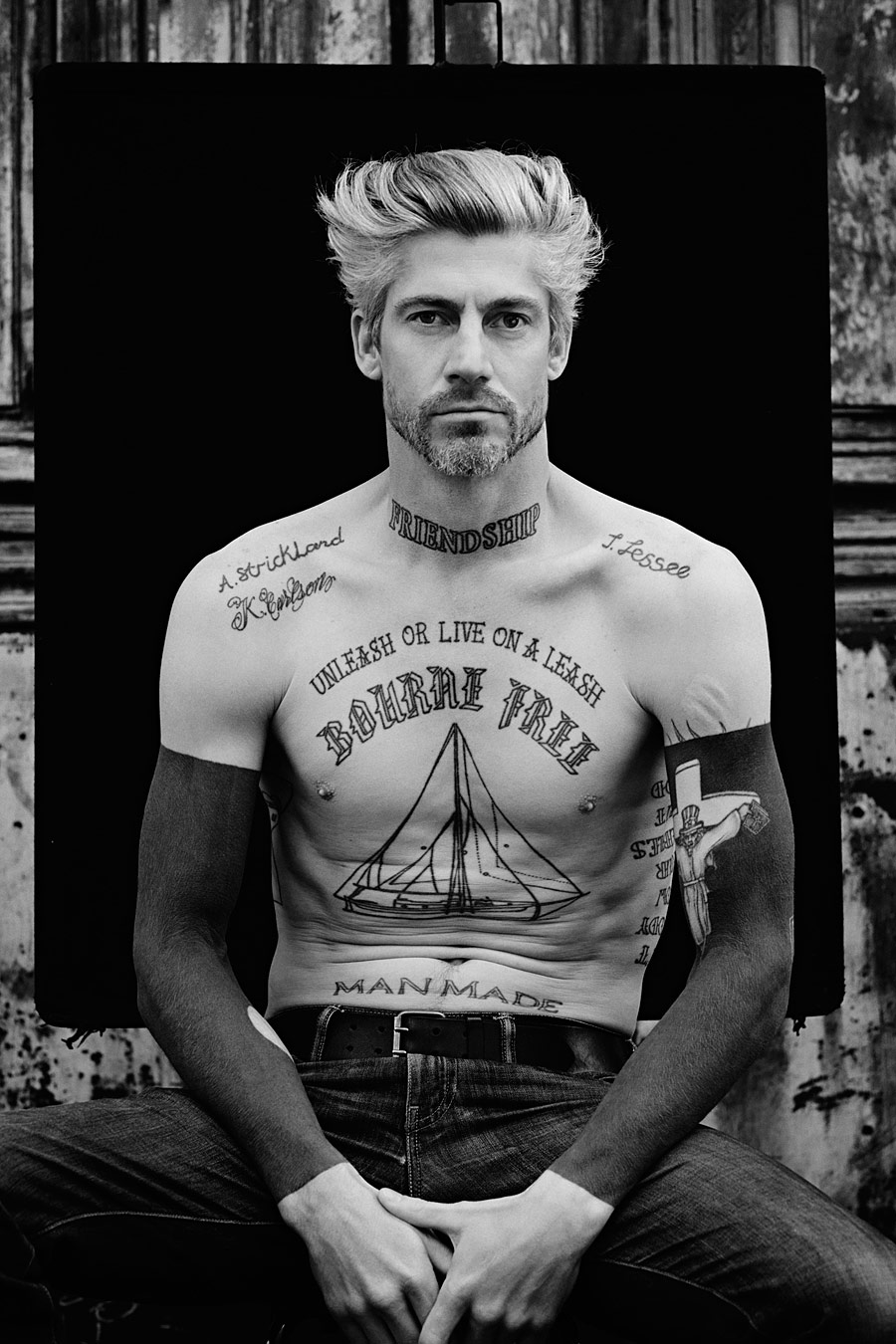 There is no time to waste, no hesitation for Scott. His reckless skateboarding earned him an international reputation, along with a severely damaged knee. 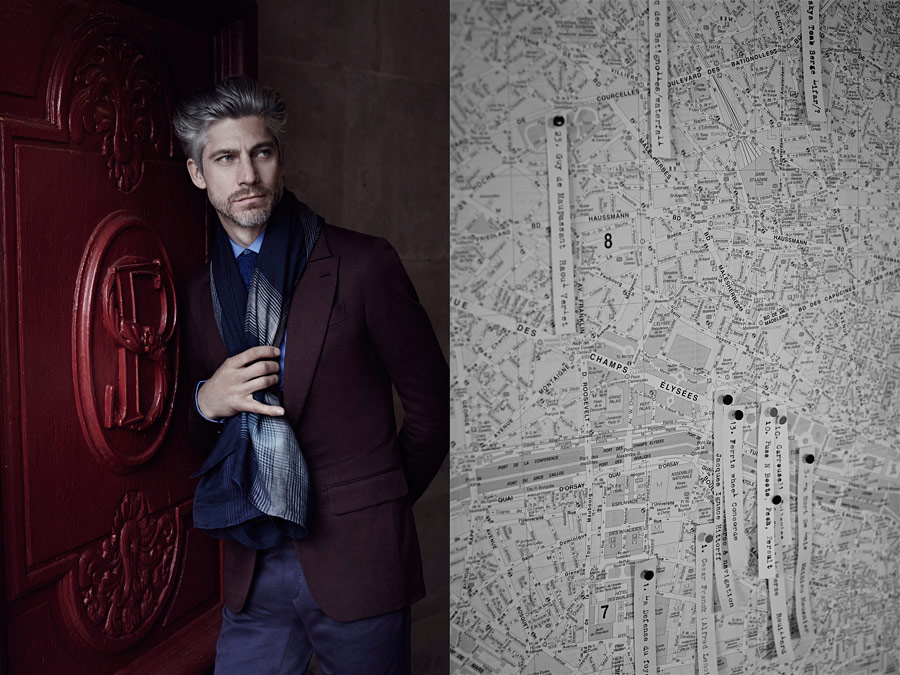 But the otherwise well-mannered man still attacks his topics full on: champion-turned-writer Scott may be “Bourne Free” as the ink on his chest proclaims, but not yet quite ready to die.

Starting at the end of a dirt road in Carolina, passing through a windowless room in San Francisco… Scott Hobbs Bourne was pretty much in the dark about the city of lights.

Now in Paris, he walks among the dead, or with them, as he likes to say. 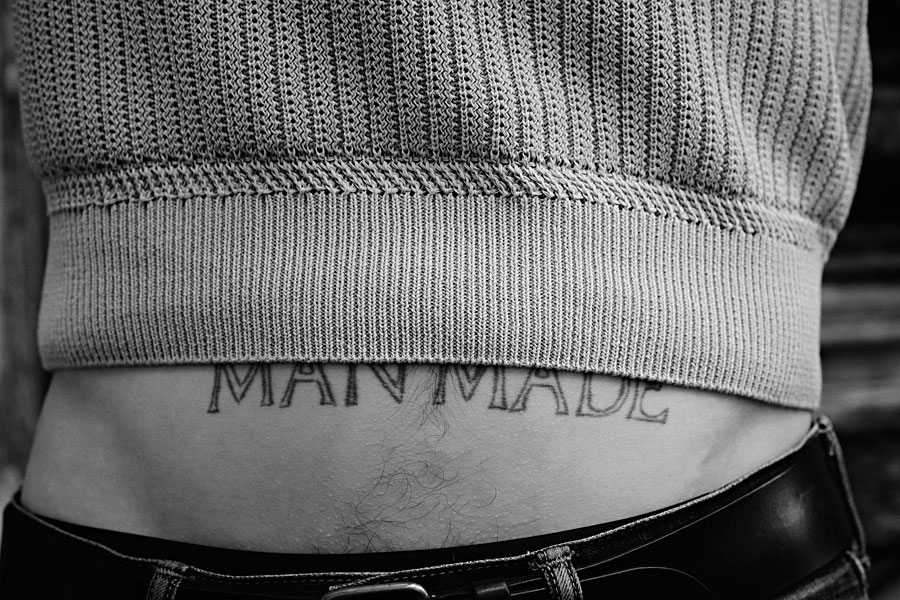 I definitely chose Paris. I came here when I was 27 and fell in love with it overnight. It took me three years to actually make the move and I really struggled hard to get back here.

For six years I was living here illegally, which is a fun game to play with the French and also kept me moving. But no matter how much I traveled, every time I returned to Paris I would see the city from my taxi window as it started to happen, or from the train, and all of a sudden you’re more excited to be home than you were about going on vacation. I totally chose this place, and everyday I’m excited to be here.

“For six years I was living here illegally, which is a fun game to play”

Your last book on your years in San Francisco was about a dark room. Then you came to Paris. What was it like going from a dark room to the City of Lights?

“‘No way! The Eiffel tower is in Paris?’ That is how ignorant I was.”

Do you see yourself as a Parisian?

I grew up in the only house at the end of a dirt road. My father was a minister, both of my parents worked in mills. I am the American cliché. Not that we were super poor – we weren’t – but we were living in a poor farm and mill community.

Where I grew up manners are really important. You open doors for ladies, you help them with their coats. And I realized now that this type of stuff is like old southern law, and it might even be sexist. It’s crazy, but I have manners and really like having them, in that regard I think Parisians are really a rough bunch of people. They plain and simply lack everyday common manners that are a must in the community I am from. But once you pay the rent here you just become instantly Parisian: you just start pushing people out of the way and say “pardon” before you even bump into someone – it’s like yelling “get out of my way.” So that’s why I say I am really trying hard to not be one of them!

It’s a crowded city and everyone wants to live here and there is a lot of competition for a space that is only getting smaller and smaller. 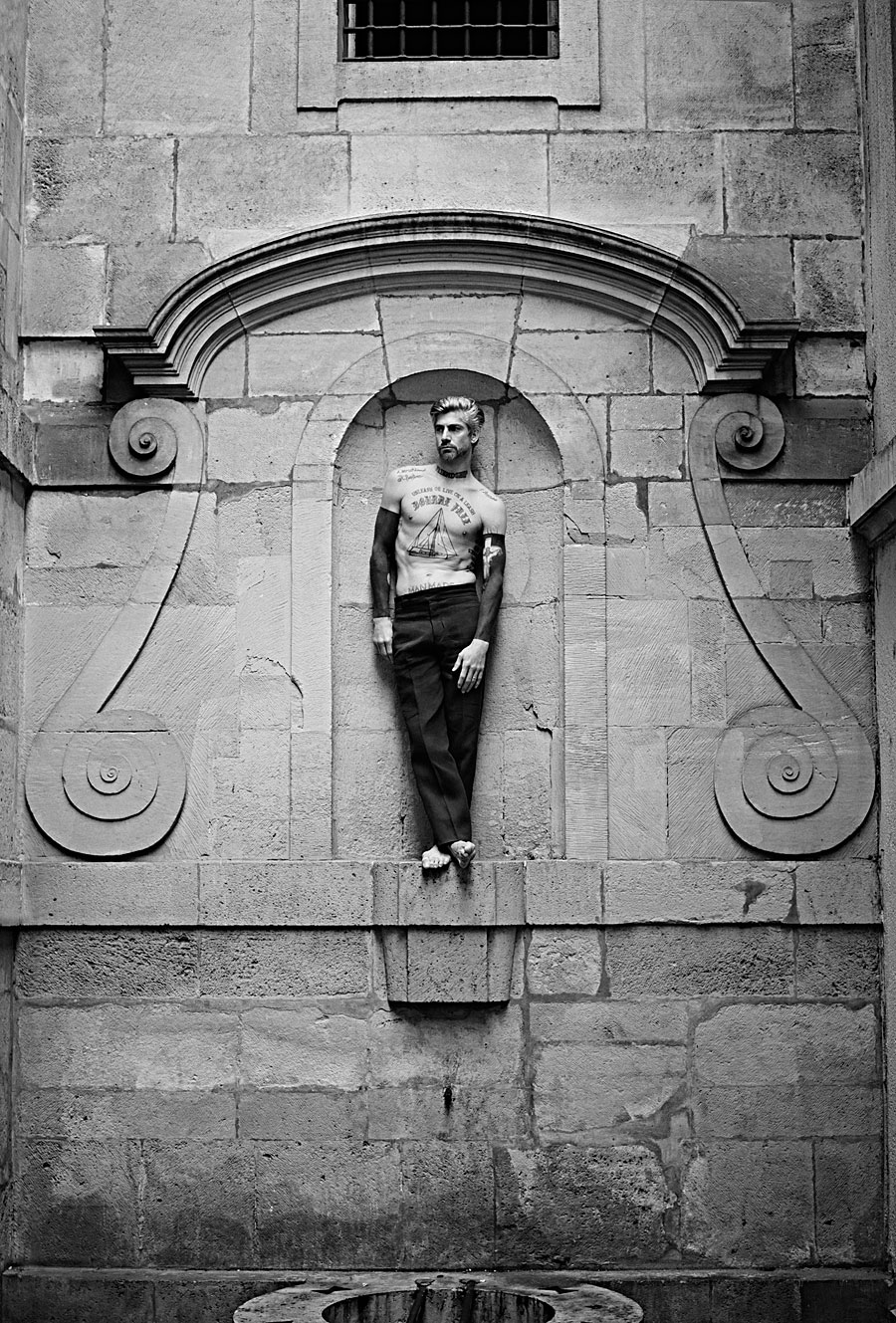 “It’s a crowded city and everyone wants to live here and there is a lot of competition for a space that is only getting smaller and smaller.”

What’s the opposite of a Parisian?

I’ll tell you: the center of Paris is… [Points to his heart] bam! Right there in the middle of your ribcage in each and every person. That’s Paris for me.

It navigates from you. It’s important to realize that Paris isn’t any one thing. For one person the center is over there and for another it’s over there. And that’s the glorious thing about this city, it’s not like an American city, it doesn’t have a defined downtown.

Where is Paris going to be in five years’ time?

It’s gonna be a nightmare! Everything inside the Péripherique will be so expensive that people like you and I probably won’t be able to live here.

Everybody wants to live in a beautiful and charming place, and they’re not building beautiful and charming places anymore. The new thing is Montreuil [an eastern suburb]. Everyone is moving out there, it’s like the new Brooklyn. But who cares? Brooklyn is horrible too. No one ever said “I wanted to move to Brooklyn,” they said, “I wanna move to New York,” and ended up living in Brooklyn. Or they said: “I wanna live in San Francisco,” but they all end up living in Oakland. But, you know, I wanna live in Paris. So I’m here, fighting my way to live in Paris.

Fucking nothing! I would go butt naked – hell yeah! How else do you greet the biggest whore in human history? You know what I mean? Jesus Christ, man. If I’m gonna go to the funeral of Paris, I’m going to bare it all. 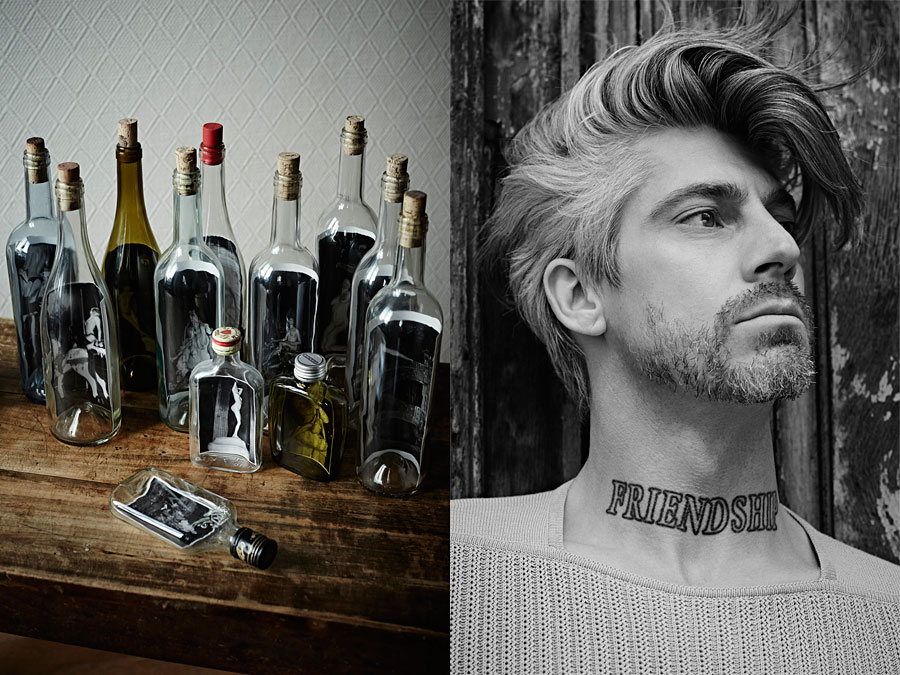 “Fucking nothing! I would go butt naked – hell yeah!”

At the same time, I’m not the first guy that slipped up under her dress. There’s something inspiring and fantastic under that garment. Is she a whore, is she a lady? I don’t know. We just know that Paris is a woman and she can give birth to fabulous ideas and artistic movements.

Historically speaking this city has been fucked by every great artist in the world. What the hell are you gonna wear to that funeral?

I love the girl that is just a little bit freaky looking, a little crazy, the one who is not like that picture perfect magazine beauty and she got you to look. That’s a really beautiful quality – to get someone to notice you. That’s the thing about Paris.

Is there anything that you would want to take with you to the grave?

What is there to take? My cowboy boots to kick some ass on the other side? I think it’s amazing: you get to live and you get to die. That’s what’s cool about it, this doesn’t have to go on forever.

I think “death” is this wonderful taboo that no one talks about. I’m fascinated with taboos. You know, it’s like, “Is Paris dead?” and I think, who cares if Paris is dead – I’m not! 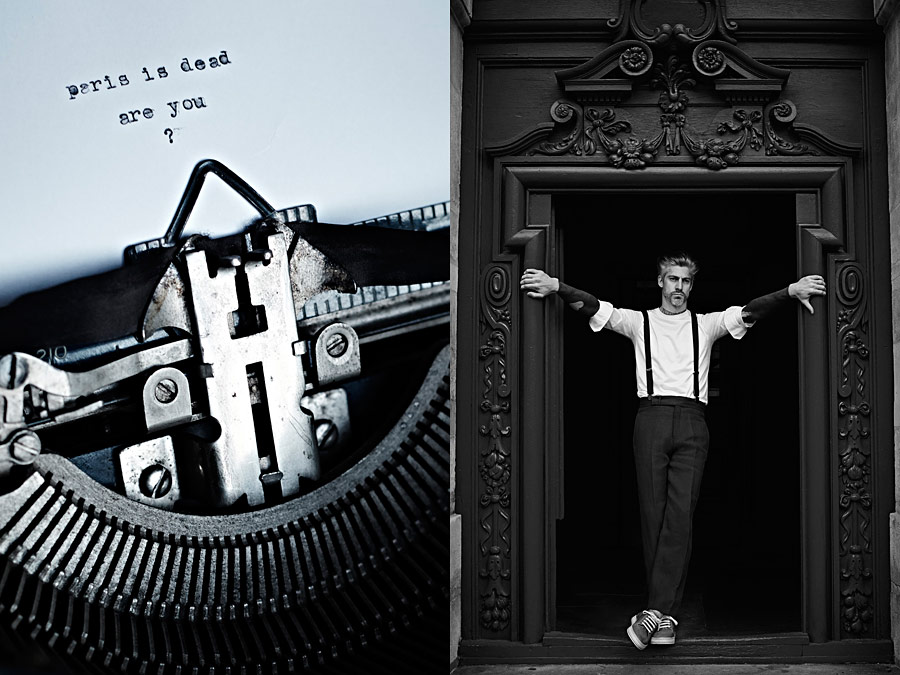 “I think ‘death’ is this wonderful taboo that no one talks about.”

Just a couple of weeks ago my wife and I snuck into the Père Lachaise in the middle of the night, just so we could walk through the cemetery alone, not to do anything else. Just so we could have it to ourselves. I’m 41 years old. There’s barbed wire [on the cemetery walls]. There are spikes. Why would I do that? Because I wanted that cemetery to myself, I wanted to walk with the dead and not a bunch of tourists.

I have this theory about something the gods don’t have: it’s called flesh [slaps the interviewer]. And everything in my life is about flesh. I am not sitting in a room somewhere meditating about something trying to get my chi on.

The one thing that we know that we cannot take with us when we die is our body. Flesh! So until death takes me, I am pushing this thing, this whole body thing, this whole physical thing as far as I can. You know, I wanna get punched in the face, I wanna eat pussy, man, I wanna live – you know what I mean? I wanna ride my bike. I wanna get naked and run through the cemetery. I wanna do everything I can with this flesh.

“The one thing that we know that we cannot take with us when we die is our body.”

I met a friend of mine yesterday who lives in this incredible four-storey mansion here in Paris, a wonderful guy with a beautiful wife and fabulous kids. After I had seen him I went home to my 60 square meter apartment, and the cars are flying by and we have this wrought-iron on our windows and the shadows are running all over the walls. And I’m like, man, I wouldn’t change my life and the relationship I have with my wife and my kid, and this relationship I’m having with Paris for anybody’s life. I really love my life and it’s because I’ve made choices to keep a firm grasp on my flesh.

Right now I’m working on a novel that begins with this guy basically being trapped, not literally trapped but figuratively trapped in this room that he just can’t leave. It’s this beautiful room that has this beautiful view of Paris all around. He sees people on the streets, but he can’t make himself participate. So it’s going be inverted from my first novel – instead of darkness it’s about being trapped in this place full of light. 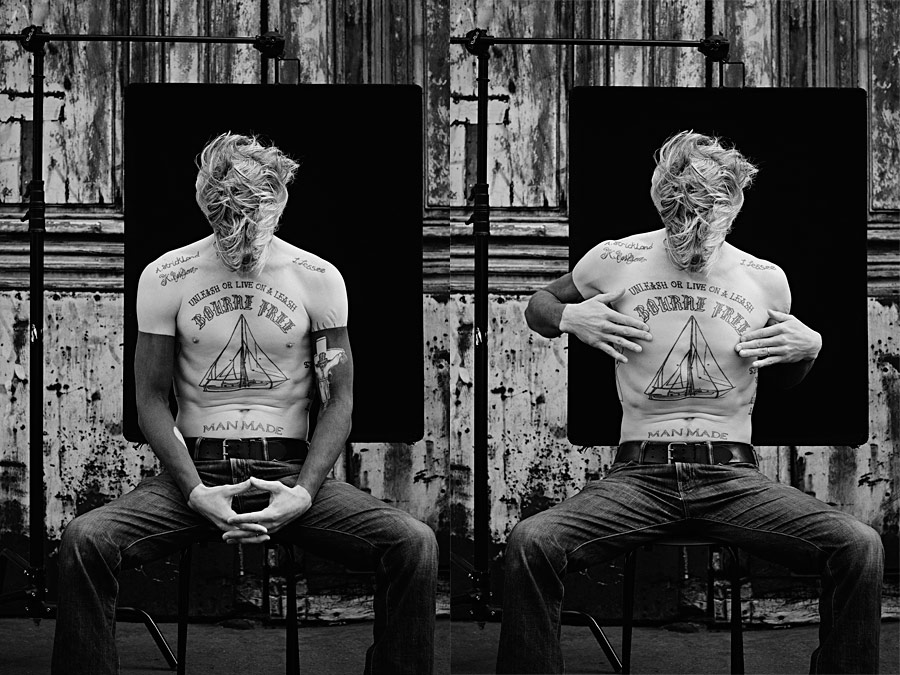 I would say the world is dead, not just Paris. That’s the whole thing about the computer generation of the “share” function: everybody is sharing and no-one is creating.

You’re living in a generation of “share” or “follow me”. [In the past,] people weren’t following anyone, they were individuals. Albert Camus or Jean Paul Sartre or Simone de Beauvoir – all these people who wrote these great things, they didn’t share, they created. Now people sit around with their cell phones and they send each other cool pictures of what Picasso did, or Carpeaux, or Nijinsky. They don’t create anything.

Is Paris dead? No. But the people sometimes are. They’re like walking cell phone clones, not an independent idea among them because they are all tuned in to the same source.

And what they do create is like a mash up of other people’s stuff. The example I always use is: we could be best buddies, grow up together, I don’t know, in Zurich, and then you go traveling and I go traveling and we both go all over the world and 5 years later we meet in Paris and you show me this tattoo you got of a mermaid while in Japan. And I say, “No way, I got a mermaid in Australia,” and miraculously we have the same tattoo. How does that happen? Because everybody uses the same references now: the Internet!

“Is Paris dead? No. But the people sometimes are.”

A tattoo artist googles “mermaid” and uses the first thing for reference, like ok yours looks a little different from mine, but they have the same pose, the same shaped hair, the same breasts. Yours is blond, mine is brunette. You know, and that’s the world now: homogenizing!

One thing super interesting about literature, even the science fiction genre, is that no one really predicted the Internet. No one predicted what would happen with it, whereas almost every other thing had been predicted, like in 1984. For example, he [George Orwell] thought of “telescreens”, like screens in every room watching people to make sure they did not step out of line. Like the computer that someone will probably read this off of, it’s a telescreen that is actually watching you!

Paris is dead and it’s up to you and me and every other person that trots across these boulevards to make it great again. You can do anything in this city.

— A story about literature SCOTT BOURNE SKATEBOARD
previous
next