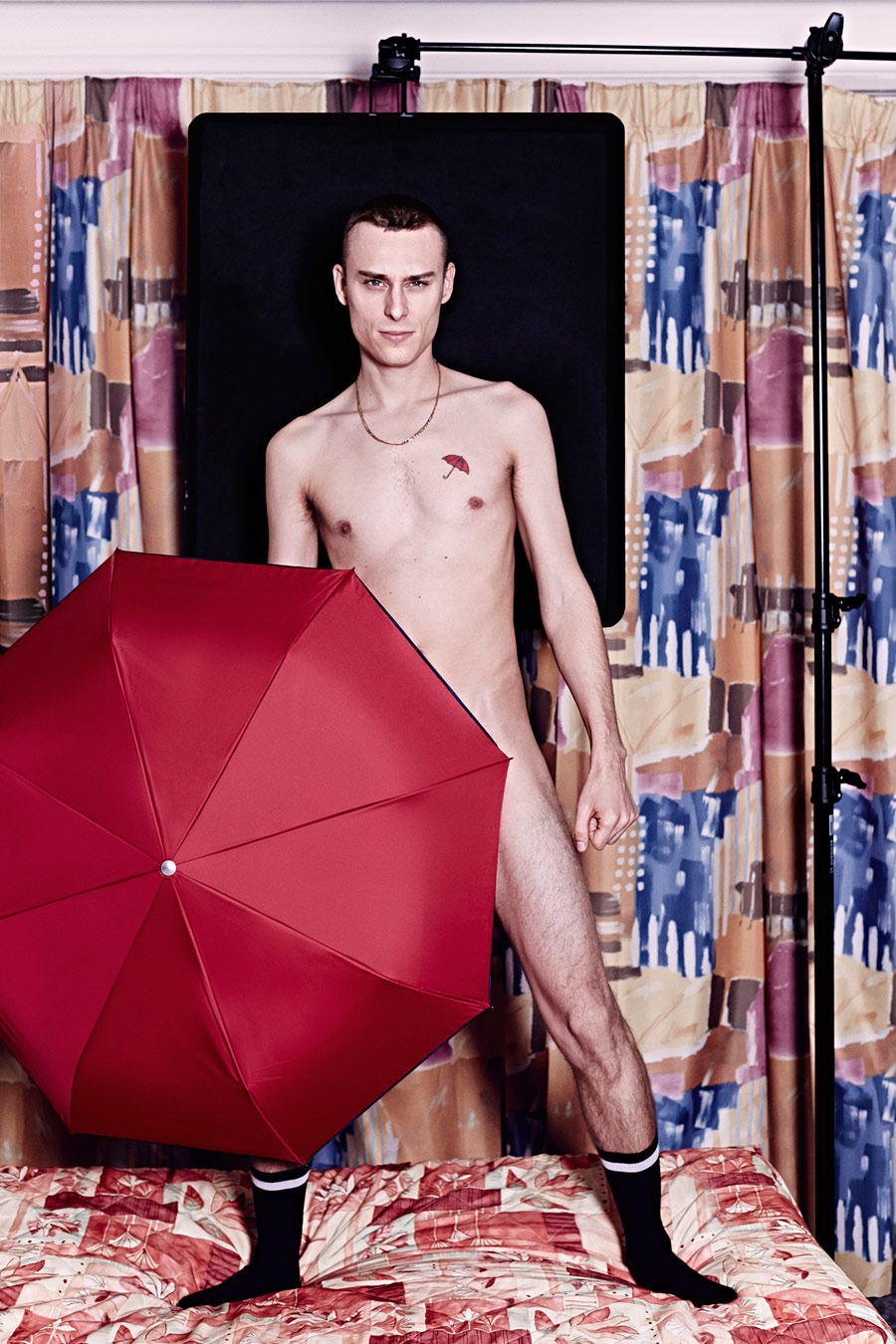 Museums, monuments, shopping… scratch that. Once upon a time, Paris’ number one attraction used to be its bordellos. 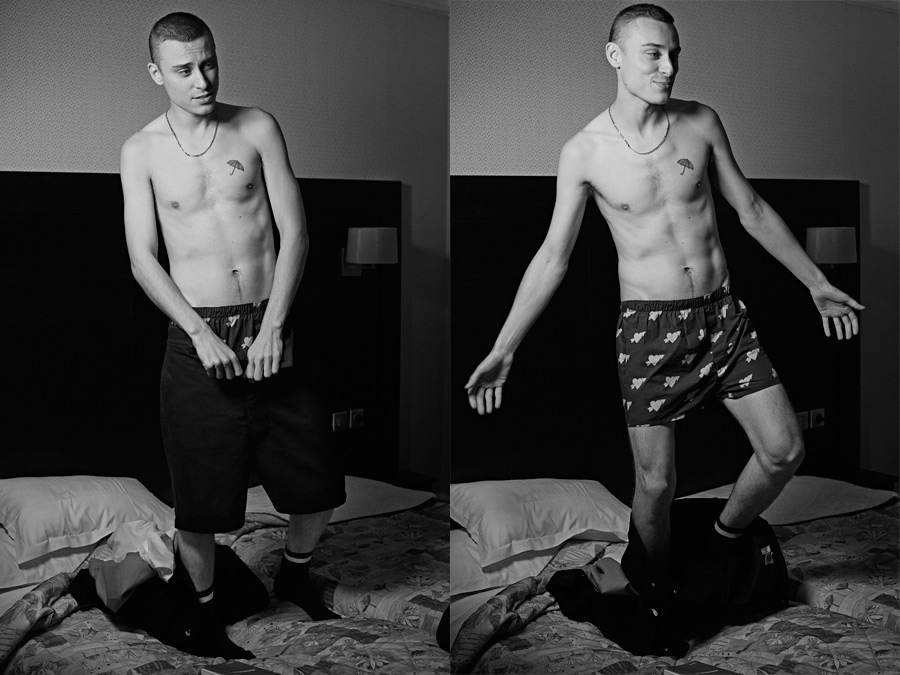 How times haves changed.  And yet today, as the DSK trial winds down, society’s oldest binaries are being recycled.

Not your average Valentine – or, at least, not without a fee – his radical politics, incisive social insight, fearsome intellect and no-fucks-given outlook are enough to wake the dead.

So meet your new “ami,” your guide to the Paris of where the light don’t shine.

But beware, his bark might not be worse than his bite… 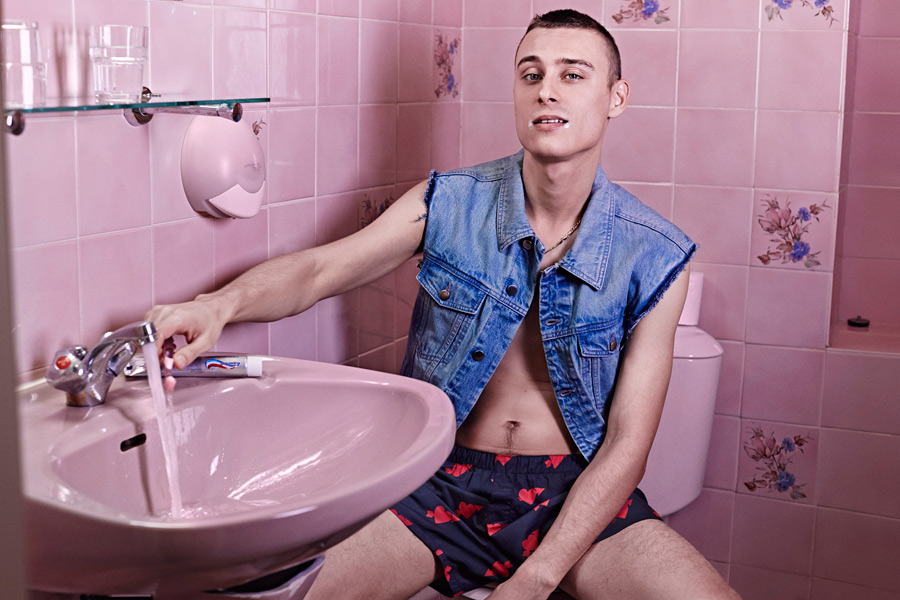 I was born in the suburbs of Paris and you don’t choose where you’re born… I chose to move into Paris when I was 18 or 20 because the suburbs are segregated from the rest of the city. As a fag or queer person, it’s much easier to access LGBT spaces in Paris proper than in the suburbs.

I chose to leave Paris for five years, though. I meet men, fall in love, and move to a new place [Laughs.] But now I’m back.

People from the rest of France would say I’m Parisian because they don’t make the distinction between Paris and the banlieue. But when you live there, the distinction is obvious and you don’t go to Paris all that much—you don’t have the time or the money to go regularly. I went for clubs and the gay scene, but there’s a strong separation and I think it’s on purpose: it’s political. The richer you are, the more central you are, and so the poor are pushed out. 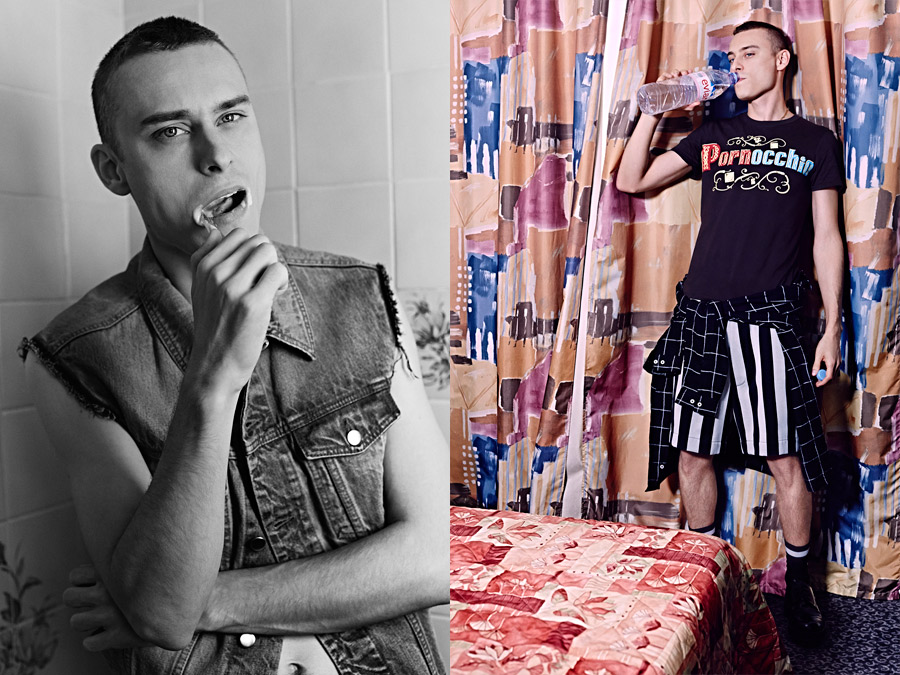 You left Paris for five years to live in London. Why did you return?

I want to stay because I think Paris is more politically interesting. STRASS (Syndicat du Travail Sexuel, a trade union for sex workers) the movement we have created, is more interesting than anything in London, from the way we construct the movement to the way we fight for our rights. In the UK, I thought it was interesting that there is a general union like the GMB [one of the largest general trade unions in Britain] which allows sex workers to join, but I quickly discovered that they’re very patriarchal structures and they don’t understand the sex industry. They don’t understand our needs and demands at all because it remains very controversial in the labour movement.

In France, on the other hand, most organisations ignore us and don’t consider us a real movement. But our independence allows us to do what we want and force them to acknowledge that we exist. Even when we were part of political structures in the UK, we got sidelined. Independence can be really valuable. They couldn’t shut me out because I was a member—even if they tried to at first—but the British have that way of using technical rules to keep you out anyway, while the French just shout at you.

“the British have that way of using technical rules to keep you out anyway, while the French just shout at you.”

Unions in the UK are riddled with bureaucracy, and it’s exhausting to fight within your own structure; I don’t want to waste time, I want to build something. I spent more time trying to talk to bureaucrats than sex workers, discussing the same old things about how the Labour party doesn’t support us, to which my response was always no, because the Labour party isn’t for workers any more: it’s corrupt. It’s the same in France. The corruption starts in the unions. The workers have lost control over the bodies supposedly fighting on their behalf.

So are the French more political than the British?

The French might be more political about some things, as the stereotype goes, but it depends on the question. You have people striking over pension rights across France, whereas in the UK so few people really fought against the cuts. Yet in terms of racism, the British won’t stand it: make a comment as an MP and you’re forced to resign, in France, you get elected President.

The French often want huge change and revolution, but always the reassurance of a hero figure to save the country. It’s depressing because we just get new patriarchs. The really depressing thing is that the next patriarch might be a woman: our first female President might be a fascist… 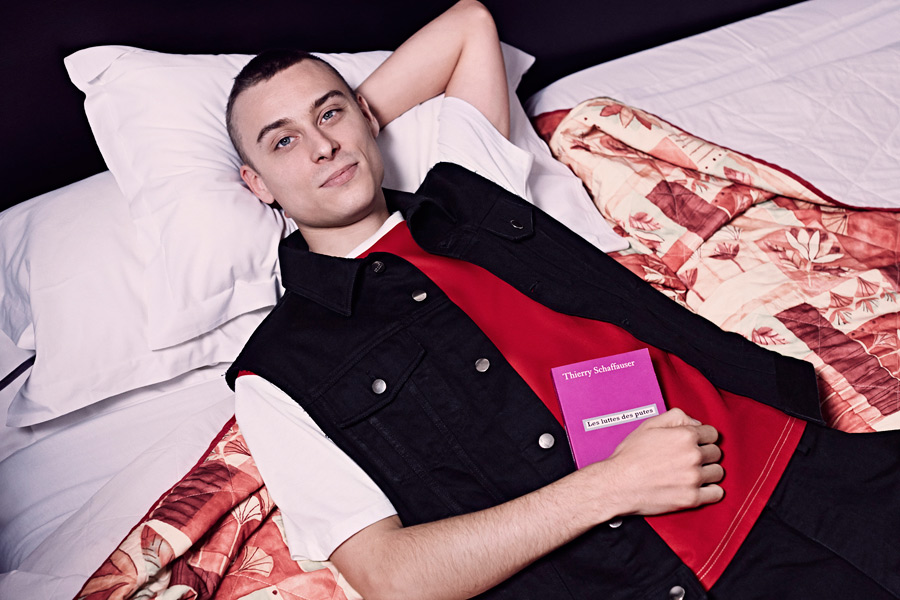 Paris has been a hotspot for left wing intellectuals and activism throughout the twentieth century. Has this changed?

Up to the 70s and early 80s, intellectuals were linked to social movements, often the communist party or the feminist movement. Almost all of the intellectuals in Paris now sound right wing, talking about demographic transformation, the loss of French identity, or themes like “Paris is Dead.” [Smiles wryly.]

Look at the Manif pour tous [the anti-same sex marriage movement] and their attacks on gender theory. The only response from the Left and even some LGBT movements is to say “No! It doesn’t exist, nobody was talking about gender theory!” They aren’t even able to defend the wealth of knowledge and theory produced in the last 40 years. When Simone de Beauvoir said “On ne naît pas femme : on le devient” [“One is not born, but rather becomes, a woman”] she started a movement of thinking about gender as a social construction. Yet now people are terrified of defending that.

There are still fights that rage on, but the Left often isn’t where it should be. It was in part due to some mainstream feminists that the veil was banned, and certain feminist movements are strongly against the decriminalisation of sex work soliciting. It’s ridiculous. There’s no self-reflection, no critique, they just repeat the same old dogma that “bodies are not for sale” without a wider understanding of capitalist systems that limit choice, and crucially, our own ability to make choices. They treat us as victims, and in doing so, remove our agency.

“They treat us as victims, and in doing so, remove our agency.”

What makes a Parisian?

Just living in Paris. I don’t like the idea that your identity is fixed. If you come from abroad and live in Paris and you get an ID card, then you’re Parisian. What even is French culture anymore? Geography is enough for me: I don’t need any more than that.

Finish the sentence: “A Parisian is…”

Someone who lives in Paris… [Smiles.] 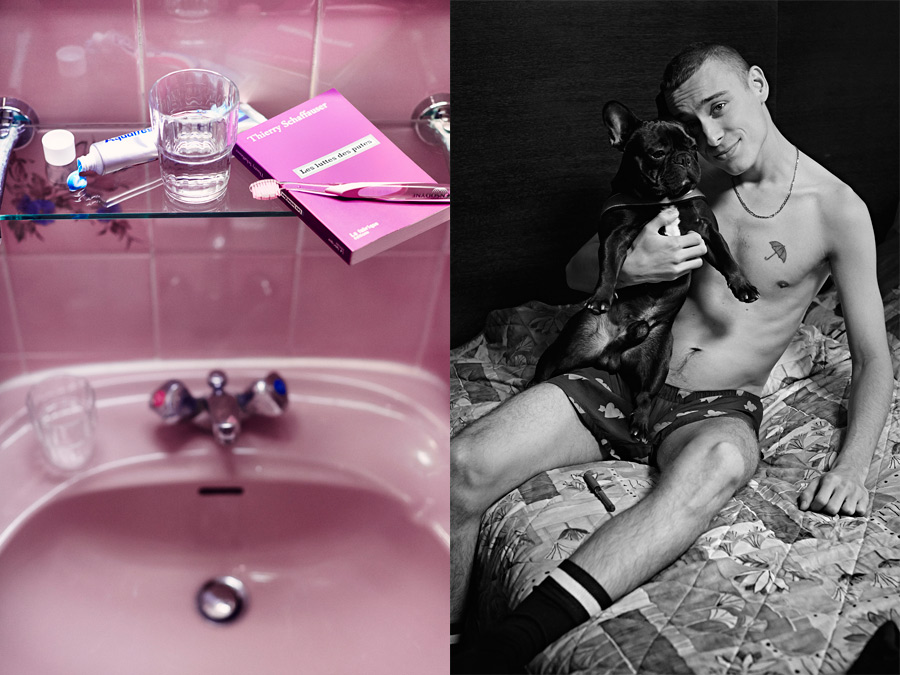 Where is the centre of Paris?

For the tourists, Notre Dame. There’s a huge post saying that you are now in the centre of Paris, and as far as I’m aware, it’s from that point that distance to other cities is measured. So I’d say that’s pretty central. I live in Barbès, though, so maybe that’s my centre. Or if I’m not there, I go east where most of my friends live.

Sex work and activism makes me travel everywhere, all the way from the Bois de Boulogne in the east to the Bois de Vincennes in the west. When I see my clients, I travel all around Paris, even to the suburbs sometimes. For sex work in general, but especially male sex work, almost everything is organised online. When I started, gay sex work centred around Porte Dauphine, but the internet has changed that. I haven’t been there for ages for work, but I go there to talk to guys and understand what their working lives are like.

“Sex work and activism makes me travel everywhere, all the way from the Bois de Boulogne in the east to the Bois de Vincennes in the west.”

Does the Syndicat du Travail Sexuel (STRASS) have a centre?”

STRASS has never owned anywhere, our meetings are hosted by ACT UP [the AIDS Coalition to Unleash Power, a radical queer organisation with chapters worldwide] who provide the room for the weekly meeting. Sometimes we meet at Bastille, sometimes Belleville, which though it’s a little less accessible, is good because of the concentration Chinese sex workers there.

More broadly, there are many places which are symbolically related to the history of sex work, like St. Lazare Prison. In the nineteenth century they put sex workers, and any women they wanted rid of, in there. I went there recently, and there’s nothing that remains, just a small wall. Now there’s a school and they have a street that runs through where the prison court was. You would never imagine there was a prison there.

Our past has been completely erased. Occasionally when things are demolished, people put up a plaque; I wish we could have something like that for the imprisoned prostitutes, but nothing remains—it’s like we never existed.

“Our past has been completely erased.”

The hôpital Salpêtrière is important too. Before the Revolution in 1789, Louis XIV made the place a prison for unwanted women, then after it became a psychiatric hospital for the “hysterical.” Like the St Lazare prison, its history is linked to the repression of women. It’s still a hospital today, and people only vaguely know about its past. People know it used to be a psychiatric hospital, because of Charcot’s studies of hysteria, which Freud later worked on, but the exact history isn’t known.

When was Paris’ Golden Age? 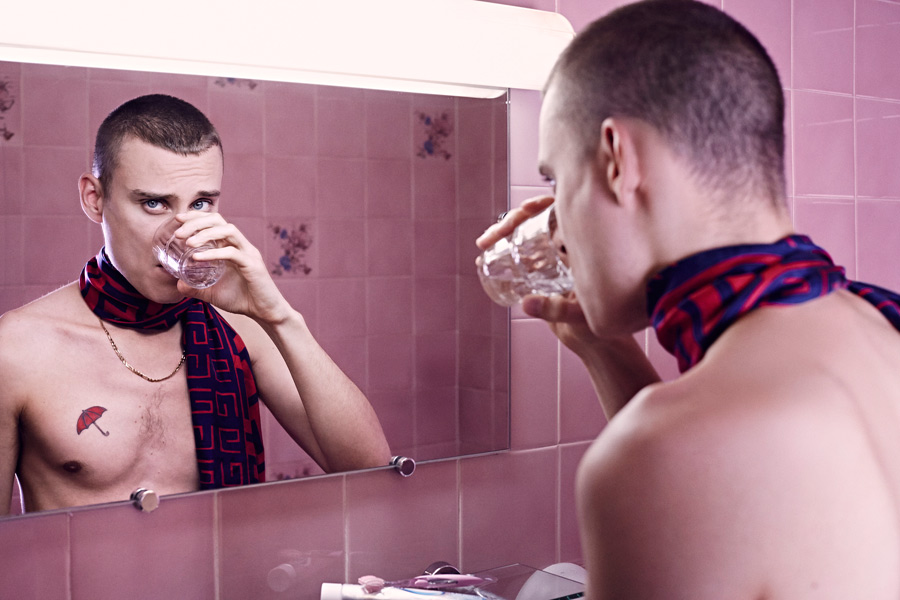 Where do you see Paris in five or ten years?

I never think about the future. I often do things on a daily basis for now, so for me or the city, no idea, but there are reasons why it doesn’t change as much as other cities like London. You need permission to build, there are strict limitations on size, and there’s a really strong urge to protect the patrimoine [cultural heritage]. I appreciate that: I often feel moved when I see structures from the Middle Ages in the Marais, for example.

When you’re in London, anyone can build anything and it’s ugly and nobody cares; people walk past and it’s normal. In Paris, people wouldn’t allow an entrepreneur to build something hideous to house his new business—the people would fight. I don’t think it’s as static as people say, and some neighbourhoods change a lot.

That aside, larger scale change is taking place. I have a fear of the far right and their rise across France, and it seems unstoppable. Paris is less concerned for the moment, but it will still have consequences here. In five or ten years, I will probably have to move to another country because of the political context.

“In five or ten years, I will probably have to move to another country because of the political context.”

I don’t even imagine my death. I don’t know where I’m going to die and I don’t care.

What would you wear the Paris’ funeral?

I’m not fascinated by death, I’m more scared by suffering, I think it’s just the end of life, that’s it. If I had to say, then my tracksuit. Always my tracksuit.

What object would you be buried with?

I’d rather give my body to people who need it than be buried.

“I’d rather give my body to people who need it than be buried.”

I know that many Parisians say it is because people like to be blasé, but there are people doing things. Maybe if you work in fashion and you get bored easily it might seem dead, but it isn’t.

People on the streets are fighting to survive. They are definitely not dead.